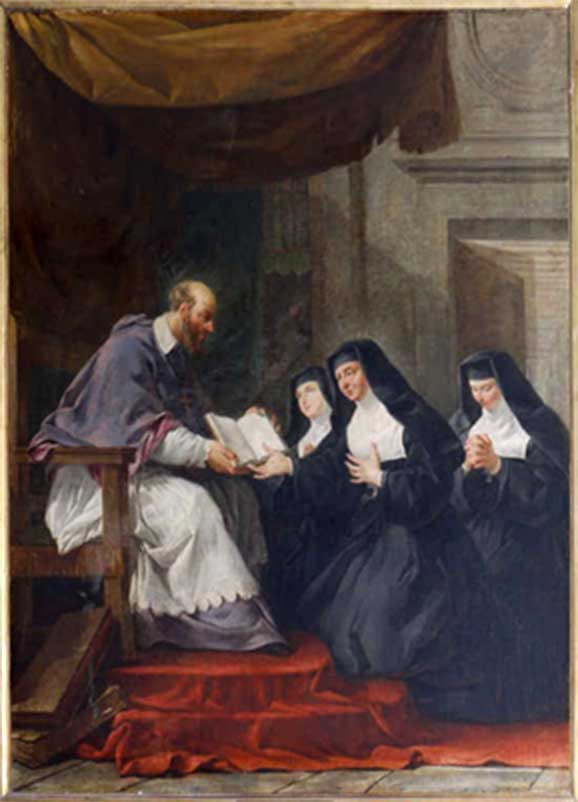 But, tell me, what are you doing in that great Paris amidst so many honours and such worldly luxuries? Oh! I beseech of you, dear child, guard yourself vigilantly on every side, lest an undue affection for these things take hold of you. My God! how I hate them all. And am I not right, dearest nephew, since they leave no time for reflection, and no desire for eternal goods? All is sacrificed to perishable enjoyments. For the love of God beware of them. I would have you protect your dear soul with a very watchful care, so that however abundantly you possess temporal things they may never take possession of you. Rise quickly and holily above them all.

I was moved to write this short essay by a remark observing that one of our American political luminaries who is running for one of the highest offices of the land hates Catholics. To this a friend of mine responded that Catholics hate themselves. This is of course patently untrue. This friend of mine then qualified that she meant it in a Polish sense. This led me to write some words explaining my views on Roman Catholicism. I should state here that it is easy to get lots of traction these days politically by professing hatred or resentment of Catholicism, and few Political figures would dare to stand up and defend Roman Catholic Church teaching or culture.

I am a Catholic, a practicing Roman Catholic and I do not hate myself, and I love my faith. I think Catholicism is beautiful. It is a work of cultural art, a system combining philosophy, theology, mythology giving inspiration to art, music, architecture and ultimately grounded in ancient traditions and history. Any Catholic who knows his or her faith well, has taken the time to study it, especially what it really teaches - cannot hate himself, but rather has to draw love and inspiration from it. But, sadly... I have met many people who hate Catholics and hate Catholicism - they are usually also anti-historical and very often reject the main moral tenets of Catholicism. I have personally experienced bias and prejudice directed at me for my expression and defense of Roman Catholicism or its teachings. And any time I try to explain the point of view of the Church - the real hatred and vile anger comes out. It is very disturbing to experience.

Poland is the last cornerstone of European national Catholicism. There used to be many other nations that had a strong Catholic identity. The French Revolution (May 5, 1789 – Nov 9, 1799) systematically destroyed French Catholic identity starting in the 18th century. German Catholicism remains in large pockets but it isn't a national expression because Germany has a national Protestant identity as well, being the foundation of continental Protestantism since Martin Luther (1483-1546). Spanish Catholicism took an almost mortal blow in the Spanish Civil War (Jul 17, 1936 – Apr 1, 1939) in the early 20th century. Franco (1892-1975) tried to save Spain politically - but he is a problematic figure for the faith, and the Communists did astonishing damage to Spanish Catholicism. Some of Catholic identity remains in the Iberio-American world, but it is far more primitive there, it doesn't have the depth it had in Spain. Italy has not recovered from the "Roman question" (Questione romana, 1849-1929) of the 19th and 20th centuries and might not recover for a long time. The Popes John XXIII (1881-1963) and Paul VI (1897-1978) during Vatican II (Oct 11, 1962 – Dec 8, 1965) both tried to fix the damage done to Italian Catholic identity by the French Revolution and later by Garibaldi (1807-1882), but like Spain, the cure is problematic because it involved Mussolini (1883-1945) in the early 20th century, who was a weak leader (whereas Franco was strong), but is a problem for the faith. Ireland was for the longest time a corner-stone of Celtic Catholicism - but this has fractured in the 21st century as Western “progressive” movements have infiltrated the Irish culture from America. As late as the 1980's the German Nobel prize winning writer Heinrich Böll (1917-1985), who was Catholic, wrote that only two Catholic nations remain true to their Catholic identity, Poland and Ireland. He attributed this to the priesthood’s loyalty to the people. Thus now, only Poland remains. Poland is the last European nation with a Catholic identity, a Catholic culture, a Catholic ethos and sensibility. If the Roman Catholic church were to lose Poland - it would most likely lose Europe. John Paul II (1920-2005) and Benedict XVI (born 1927) both products of Vatican II observed that in some areas of Europe the process of de-christianization has deep roots. De-christianization was invented by the French Revolution and found its expression in the actions of Joseph Fouché (1759-1820) and Jean-Marie Collot d'Herbois (1749-1796) both of whom ordered the execution of nuns and priests, and of course in the neo-pagan actions of Maximilien Robespierre (1758-1794) who invented a whole new reason-based religion to replace Catholicism. Napoleon (1769-1821) and Pope Pius VII (1742-1823) both tried to repair the damage with the Concordat of 1801 but like latter day politically tainted solutions it was problematic because of Napoleon.

The Church is in a way preparing us for the loss of Europe. Cardinal Robert Sarah (born 1945) and Pope Francis (born 1936) are both telling us that we might lose Europe, that the damage of de-christianization started by the French revolution, fed by the Age of Enlightenment and later by the monstrous ideologies of Fascism, Socialism, Nazism and Communism (each one of which has on its conscience the mass murder and persecution of Christians, just for their faith - in odium fidei - that is in hatred of the faith) and it may not be possible to repair this damage. Modernity has overturned the once sacred Christian ethos. Catholic understanding is at war with the forces of ethical relativism and scientism which along with the loosening of social-mores, and questioning of bronze-age human institutions and traditions has led to intellectual confusion in which it is next to impossible to evangelize without being accused of bias, prejudice or bigotry, or even “hate speech” - the very idea of sin has been rejected by the modern progressives, normalcy and the ideas of natural law as understood by Thomas Aquinas (1225-1274) or Thomas Hobbs (1588-1679) are rejected as well, the study of philosophy is in free-fall, so the loss of Europe for the Church is really just one symptom of a catastrophic collapse of European civilization and culture, both shaped by Christianity, and specifically forged by Roman Catholicism. We tend to think that civilization is buildings and technology, without realizing that civilization is more properly the relationship of man to truth, man to man, and man to authority. The works of the Polish historian and Philosopher Feliks Koneczny (1862-1949) come readily to mind here. The buildings and industry will survive this collapse, but what will emerge is not Europe or the West as we understand it, but rather a different civilization, one in which the relationships of man to man, man to truth and man to authority are not just different but in many cases opposite to our whole heritage.

Cardinal Robert Sarah is from Guinea in Africa, and he is Francophone - he has said bluntly that the "barbarians are in the city" - not outside of the gates, but in the city of the West itself. 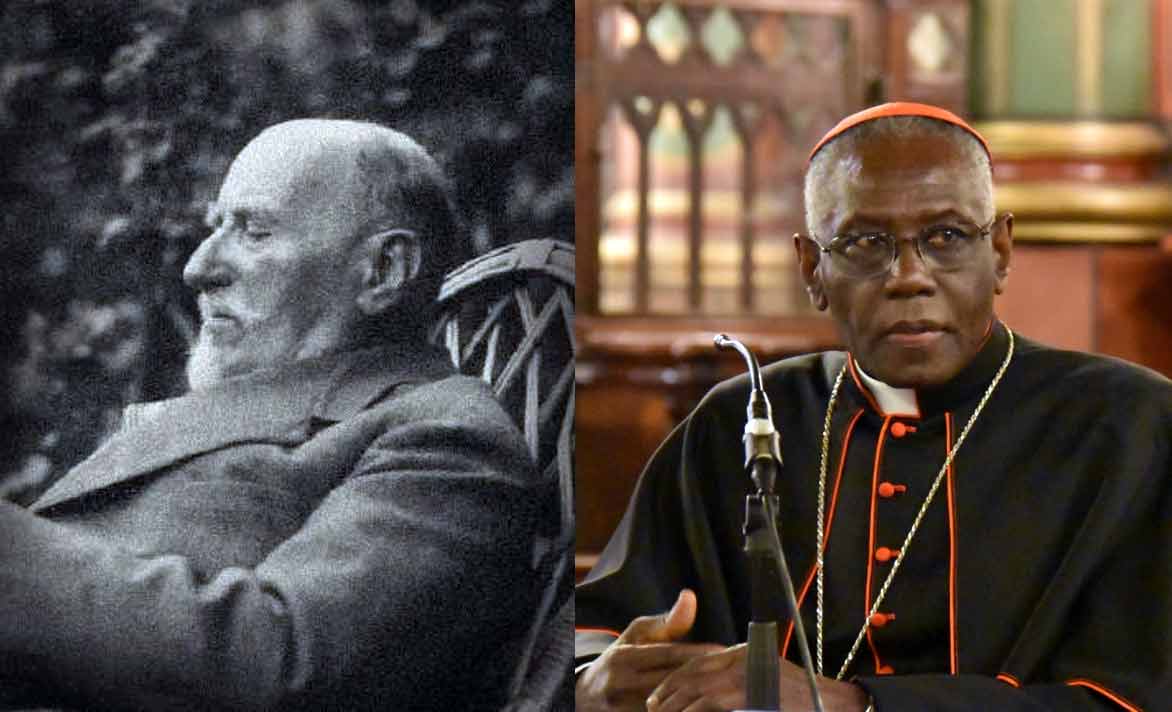 Sarah worries that the loss of the West and by this he means Europe will set Christianity back a thousand years. Pope Francis is from Argentina but he is Italian by ethnicity - the fact that he became Pope is a sign of what is likely to come, it is a re-alignment, or a re-centering away from Rome, away from Europe. Once Europe is gone, the Roman Catholic Church which is already a South American, Asian and African institution will cease to be a European or Western Church. This may of course be God's plan - maybe Europeans and Westerners have abandoned the Church because it is too painful to remain Catholic. I find myself very often at Holy Mass with Mexicans, Nigerians, Filipinos, Vietnamese - and I find those peoples far more Roman Catholic than many Poles that I know, and it goes without saying that I find their sensibility and ethics far more Catholic than those of ex-Catholic nations, like France. Every now and then I meet some European Catholics - but unless they are Polish and from a small town or a village, they are all "worldly" and uncomfortable with Roman Catholic morality, or aesthetics. They are either half-Protestant (if they have any faith left) or they are half-Agnostic or even fully Atheist or "spiritual-new-age" - and they find my faith "funny," or "outdated" or worse, some say to my face that Catholicism is pure evil. It is very painful to be told by a seemingly intelligent person that the truth which the Church has taught for 2000 years is now viewed as "evil." Truth, of course doesn't change according to fashion, but the acceptance of truth does rely on fashion and trend, especially political and intellectual currents. During the heights of any heresy - speaking the truth can get you killed. In fact it usually does, it’s why the Church has so many martyrs, and very recent ones too.

I once had a great conversation at my cousin's wedding with some Coptic Catholic (Egyptian/Ethiopian, Orthodox) priests - there were about 12 of them, all officiating at the wedding. I observed with great interest the Coptic religious wedding ceremony. Afterwards I asked them why they said "Our Father Who art in Heaven" (in Latin: the Pater-Noster, in Polish: Ojcze Nasz) so many times during the wedding - they must have said it over 30 times or more, each one of them individually, I actually lost count at 30. They were a bit perplexed by the question, and they asked me how many times I say it myself during holy mass. I told them "once, with everyone." You should have seen their reaction. They were beyond shocked, they nearly fainted.

But Konrad, it is the actual words our Lord taught us to pray! You should say it at least a dozen times every day, not just once a week at mass!!!!"

That made me realize how bad things have gotten in the West. 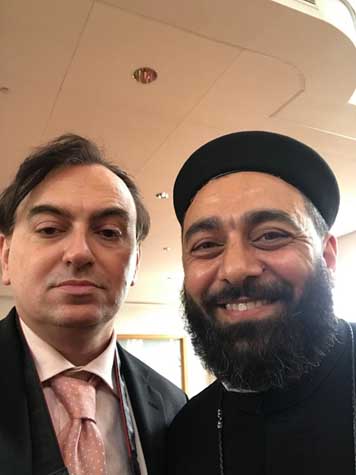